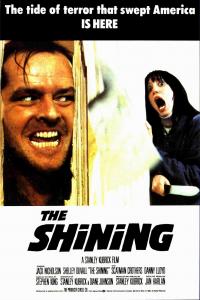 A man, his son and wife become the winter caretakers of an isolated hotel where Danny, the son, sees disturbing visions of the hotel's past using a telepathic gift known as "The Shining". The father, Jack Torrance, is underway in a writing project when he slowly slips into insanity as a result of cabin fever and former guests of the hotel's ghosts. After being convinced by a waiter's ghost to "correct" the family, Jack goes completely insane. The only thing that can save Danny and his mother is "The Shining".